Museum of Deinze and the Leie Region 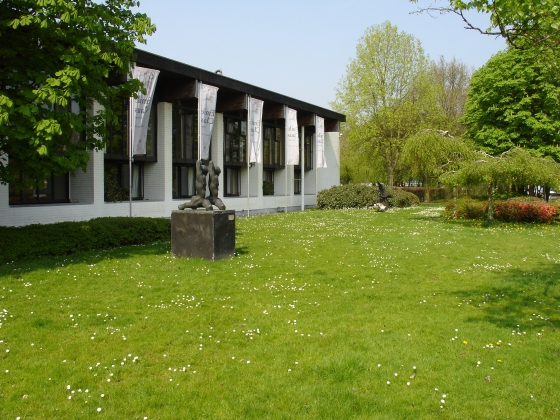 The Museum of Deinze and the Leie Region possesses in total fifteen works by George Minne, twelve sculptures and three drawings. In 1941, the museum bought Mother and Child, a late sculpture from 1935, executed in white stone. It is the only work of Minne in the collection that the museum purchased, whereas the remaining fourteen works were acquired by gift, legate or permanent loan. George Minne himself gifted before World War II the plaster maquette for the Servaes-Van Gavere Memorial from 1902. In 1977, the museum acquired from a private collection a bronze version of the Large Relic Bearer from 1929 and two pencil drawings, Mother and Child (undated) and Nude from 1915. The museum got per legate in 2006 from the same private collection two sculptures in white marble: Bust of a Woman from 1927 and the Small Figure Kneeling from 1896. In 1988, a plaster version of Bust of a Dockhand from 1910 was gifted and in 2010 the museum acquired seven pieces in permanent loan (future legate): a charcoal drawing from 1935 with the depiction of The Eucharist and six sculptures, amongst which are a bronze version of the Small Injured Figure from 1896, the bronze Kneeling Youth with a Shell from 1923, the plaster Eva III from 1928, as well as a bronze and plaster version of The Embrace from 1929, and a Woman Bathing from 1931, executed in bronze. Only two works in the collection the Small Figure Kneeling and the Small Injured Figure date from the period before 1900.