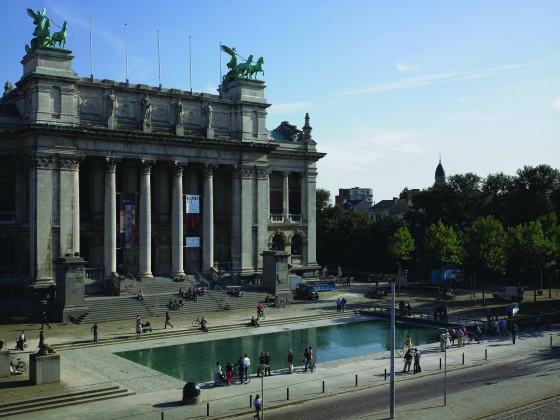 In 1911, the Royal Museum of Fine Arts Antwerp purchased at the Triannual Exhibition in Antwerp an initial work by George Minne: Bust of a Man (inv. nr. 1714). During the interbellum the museum acquired six works by the artist: two sculptures and four drawings. The Small Relic Bearer was purchased in 1926 and is the only marble sculpture in the Minne collection of the KMSKA. One year later The Friends of the Modern Art gifted three drawings: Christ from 1921 and two portrayals of Mother and Child from 1920 in black chalk. The drawings collection was further enriched by the gift of a large charcoal drawing from 1926 with the depiction of a Pietà. Finally, the Belgian State gave a bronze Pietà on permanent loan in 1938.

After World War II, the Minne collection of the museum was further strengthened with a drawing and eight sculptures between 1949 and 1994. In 1949, the museum acquired a plaster design for the Volders' monument, also known by the French name Solidarité (Solidarity) from the collection of Henry Van de Velde. A bronze version of the same work and the large The Dockhand were acquired by the museum in 1950 by the Burthoul auction in Brussels in 1950.

The rich legate of Sara and Marthe Huysmans-since 1982 taken up in the collections-contains, inter alia, three sculptures and a drawing by George Minne: the charcoal drawing Standing Nude from 1929, a small, stone sculpture Couple Entwined (no date known, late work), a bronze version of Bust of a Woman from 1926 and Naked Youth, also executed in bronze. Marthe Huysmans also added in 1984 a bronze, Naked Young Woman. (From both works just mentioned no date is also known).

Finally, the museum purchased in 1994 a second bronze version of the torso of The Dockhand from circa 1912-1913.

In total, the KMSKA has sixteen works by Minne. Only three of these date from Minne's symbolist period from before 1900: Small Relic Bearer, Solidarity in bronze, both purchased and the plaster version of Solidarity, gifted by Henry Van de Velde. The majority of the remaining works were acquired through gifts, legate or loan and all date from the late creative period of the artist.